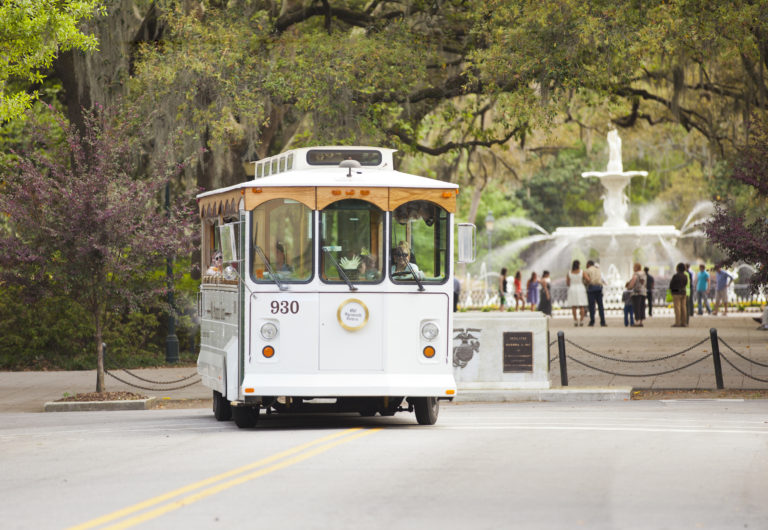 Can you believe it’s been almost 30 years since Forrest Gump sat on that bench and told us “life is like a box of chocolates?” It was in July 1994, that this slow, but sweet character played by Tom Hanks entered theaters—and our hearts. At U S Tours, we thought today, “for no particular reason” that we could celebrate and remember the simple life of Forrest, while touring movie sites, while eating shrimp, and while discovering the Southern beauty of Savannah and Beaufort – two towns that “goes together like peas and carrots.”

Following arrival you enjoy a unique Southern Family Style Dinner at Mrs Wilkes Boarding House. You meal will feature authentic low-country cuisine of friend chicken, black-eyed peas, and biscuits Plus, a visit from a Forrest Gump character actor we have hired to visit at the end of the meal.  Forrest will have a few boxes of chocolates and pose for photos.

Following dinner your group will visit Chippewa Square, known for the famous park bench scenes from Forrest Gump.  Here in the opening shot of the film, a feather floats high above the trees, then sweeps down past the Independent Presbyterian Church, the James Oglethorpe Statue and makes its way toward the park bench. Tom Hanks, who plays the role of Forrest, sat on this park bench for about 80% of the film telling his life story to anyone who will listen.   Note: The bench was actually a movie prop and has been placed in the Savannah History Museum.

This square is also the center of Savannah’s nightlife and entertainment because of the Historic Savannah Theatre. It is the oldest theatre in the United States and still produces shows nightly.  This evening you enjoy 2-hours of high energy music, dance and comedy; a perfect for a southern evening! (D)

This morning’s tour is on the Old Savannah Trolley through the Historic District of the City.   It will focus on sites from movies filmed here, most particularly: “Midnight in the Garden of Good and Evil,” “Something to Talk About,” and of course “Forrest Gump.”  Forrest will appear for your group during this tour also.

Also featured this morning is a visit to the Savannah History Museum where you walk through displays on the city’s history from 1733, through the American Revolution and Civil War, all the way to today!  You will also see exhibits highlighting Savannah’s musical, cultural and artistic contributions from the famous bench from Forrest Gump to the life of Girl Scout founder, Juliette Gordon Low.

Next you have time to explore the Savannah Riverfront. It’s one of the city’s most popular tourist destinations.  The cobblestone streets and century-old buildings are now antique shops and are filled with quaint restaurants and pubs.

Later this afternoon you learn about tea traditions and experience an early 19th century tea in the historic Davenport House Museum.  Your group will tour areas of the historic home where tea service took place and will participate in an afternoon tea with costumed interpreters.   Note: This event requires that guests be able to walk up and down stairs.

Tonight, there is a choice of dinners we can plan for your group.  Perhaps you would enjoy a dinner cruise, a visit to The Pirate House, or a free evening on the Riverfront where your travelers can choose there own local flavors. (B,D)

Today, you head to Historic Beaufort, a city filled with regal antebellum homes of pre-Revolutionary and pre-Civil War eras.  Beaufort is also known for the major motion pictures that were made here including:  “The Big Chill,” “The Great Santini, “Prince of Tides,” and “Forest Gump.”

Another thing Beaufort is famous for is its shrimp. No matter where you travel in Beaufort County and the surrounding area, you’ll likely cross the waters of Port Royal Sound. These waters are some of the most pristine in the country and home to shrimp, crabs, oysters, claims and fish.  This morning you will learn more about the area when you tour the Port Royal Sound Maritime Center.

The exhibits include a 3,000 gallon salt water tank displaying local fish, and a shallow touch tank that will showcase seasonal marine life from the local rivers. You will also learn about the Carolina Snowball, an albino dolphin who was frequently spotted in Beaufort waters beginning in the 1950s.

Next, you will have some free time downtown and at Waterfront Park for lunch on own and shopping. The area is lined with dining options, shops, and art galleries, and more.

The afternoon features a horse-drawn carriage tour of the Historic District.  Re-live the past through the narration of a local guide and the clippity-clop of the horses. You will learn about Beaufort’s Civil War History, see Antebellum homes and Victorian Architecture as well as Hollywood movie sites.

As Forrest says, “Life is like a box of chocolates, you never know what you are going to get!”  Your group will visit the Chocolate Tree, a full-fledged chocolate and candy manufactory where customers are drawn inside by the luscious aroma which permeates the air. Windows into the production area allow visitors to see some of the more than 60 specialty chocolate delectables and other confections being made.

The evening’s highlight will be a “Low Country Boil” or as the locals refer to it “Beaufort Stew” and “Frogmore Stew.”  Enjoy a delicious combination of boiled shrimp, sausage, corn and potatoes before returning to Savannah for the night. (B,D)