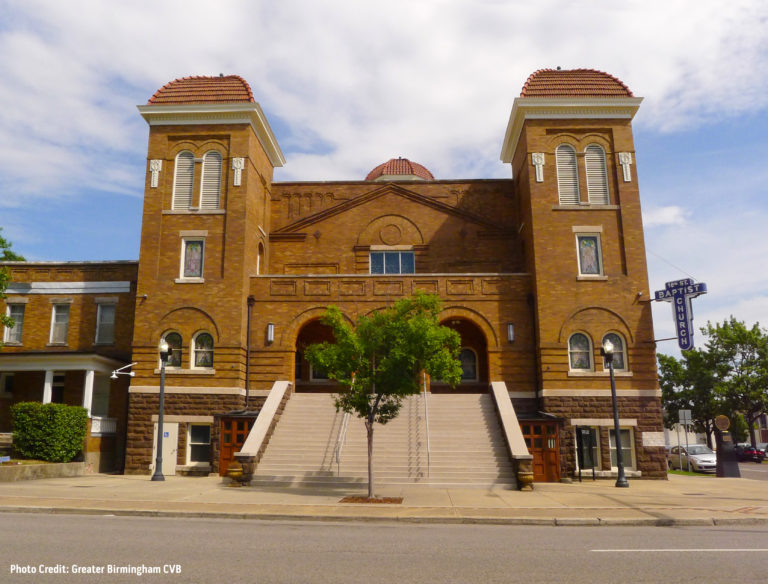 From Atlanta’s MLK, Jr National Historic District to The Legacy Museum in Montgomery this tour shines a light on the Civil Rights Movement. You will walk across the Edmund Pettus Bridge in Selma, stop at the National Voting Rights Museum and in Birmingham visit the 16th Street Baptist Church. Come tour the Old South where changes were difficult but were accomplished.

This tour package begins with arrival at the Drury Inn Atlanta Airport Hotel for a two night stay. Dinner is on your won this evening, but the hotel’s offers a 5:30 Kickback with a rotating menu of free food and drink every evening from 5:30 -7:00pm.

This morning the group will visit The National Center for Civil and Human Rights. It is a museum and cultural institution that connects the U.S. Civil Rights Movement to human rights challenges today. Enjoy a personal guided tour as well as time to visit the exhibits themselves. Every moment, every image, every artifact and exhibit provides a unique learning experience for everyone who visits.

This afternoon, tour the Martin Luther King National Historic Site. You will begin at the Visitor Center then see the World Peace Rose Garden and it “Behold Memorial.” Next is the Ebenezer Baptist Church where you will hear recordings of Dr. King’s speeches, watch a video and browse through the exhibits. Then stop at the Reflecting Pool to Dr. and Mrs. King’s graves and their eternal flame.

The last attraction of the day is the APEX Museum, or African-American Panoramic Experience Museum. It presents the rich and often untold story of African and African-American history and culture. The museum is housed within a 100-year-old building, erected by African-American masons. Its exhibits are filled with artifacts and presentations spanning centuries, from ancient African civilizations to contemporary events. Return to hotel. Dinner on own. (B)

This morning you depart Atlanta and travel to Montgomery, AL. On arrival, you visit “The Legacy Museum: From Enslavement to Mass Incarceration” is situated on a site where enslaved people were once warehoused. A block from one of the most prominent slave auction spaces in America, the Legacy Museum is steps away from an Alabama dock and rail station where tens of thousands of black people were trafficked during the 19th century.

Then visit the Rosa Parks Museum which collects, preserves, and exhibits artifacts relevant to the life and lessons of Rosa Parks, the Montgomery Bus Boycott, and the Civil Rights Movement.

The afternoon includes a visit to the Dexter Avenue King Memorial Baptist Church.  In this National Historic Landmark, see the modest pulpit where Rev. Martin Luther King, Jr. first preached his message of hope and brotherhood. This church was also a center point of the Montgomery bus boycott. A large mural in the church depicts King’s civil rights crusade from Montgomery to Memphis.

Tour the Dexter Avenue Parsonage Museum.  The restored parsonage of Dexter Avenue King Memorial Baptist Church appears as it did when Dr. Martin Luther King Jr. and his family resided here during Dr. King’s pastorate from 1954-1960. The parsonage was bombed several times during the fight for civil rights, but fortunately no one was injured.

Next, enjoy a Night Visit to the Memorial for Peace & Justice.  Set on a six-acre site in downtown Montgomery, Alabama, the National Memorial is the nation’s first memorial dedicated to the legacy of enslaved Black people, people terrorized by lynching, African Americans humiliated by racial segregation and Jim Crow, and people of color burdened with contemporary presumptions of guilt and police violence.

The memorial is well lit at night and uses sculpture, art, and design to create a sober, meaningful site where people can gather and reflect on America’s history of racial inequality. It includes a memorial square with 800 six-foot monuments to symbolize thousands of racial terror lynching victims in the counties and states where this terrorism took place.

Check into the Drury Inn, Montgomery, AL for the night.  Dinner is on your own this evening, but the Drury offers its 5:30 Kickback with a rotating menu of free foods and drinks. (B)

Today, on arrival in Selma, your first stop is the Selma Interpretive Center. Located at the foot of the Edmund Pettus Bridge, it serves as a Welcome Center with an Interpretive Exhibit and bookstore.

Then  visit to the Mission of the National Voting Rights Museum and Institute is to collect, exhibit, interpret and document images and artifacts related to the history of Selma, the Voting Rights struggle, Voting Rights in America, and the Civil Rights Movement.

Next, meet a local guide who will lead you on a Footprints to Freedom tour to include the historic Brown Chapel A.M.E Church and a walk across the historic Edmund Pettus Bridge.

You will have time for a quick and easy 10 minute walk back & forth across the Bridge. It still is an active roadway bridge with cars yet has a safe pedestrian walkway on both sides of the lanes. This famous Civil Rights landmark represents a pivotal point in Voting Rights as law enforcement officers attacked marchers with tear gas and nightsticks on “Bloody Sunday,” March 7, 1965.

The Old Depot Museum tells the story of Selma, Alabama and this history is one inherently woven with African American history and culture. The Civil Rights room of the Old Depot Museum is the most trafficked space in the museum. Here, the events of Bloody Sunday, and several other transformative moments in the struggle for equal civil and voting rights, are placed into the local, historical context by answering the question of “Why Selma?”

It’s not open to the public but we will make a photo stop at the Brown Chapel AME Church. It played pivotal roles in the marches that helped lead to the passage of the 1965 Voting Rights Act and was the starting point for the Selma-to-Montgomery marches, Brown Chapel also hosted the Southern Christian Leadership Conference (SCLC) for the first three months of 1965.

End the day in Birmingham, AL where you stay the next two nights at the Drury Inn.  Dinner is on own, but the Drury offers the 5:30 Kickback featuring a rotating menu of hot foods and cold beverages. (B)

This morning begins at the Birmingham Civil Rights Institute, the focal point of the Civil Rights District. Here richly detailed exhibits reveal slices of black and white life from the late 1800’s to the present. A series of galleries tells the stories of daily life for African-Americans in Alabama and the nation, and how it differed dramatically from the lives that white people took for granted.

Just across the street from the Civil Rights Institute is the Sixteenth Street Baptist Church. A National Historic Landmark, the church was the site of a dynamite bombing in 1963 that killed four young African-American Girls: Denise McNair, Carole Robertson, Cynthia Wesley and Addie Mae. (Tour as available)

A life-size sculpture in adjacent Kelly Ingram Park faces the church and captures the spirited nature of the young girls killed in the bombing. This historic park served as a congregating area for demonstrations in the early 1960’s, including the ones in which police dogs and fire hoses were turned on marchers by Birmingham police. The park has a free cell phone tour that guides visitors through the tumultuous events of 1963.

Visit the Freedom Riders Museum.  In 1961 groups of volunteers made history by challenging the practice of segregated travel through the South. They called themselves Freedom Riders as they crossed racial barriers in depots and onboard buses. The 1961 Freedom Riders did not begin or end their journey in Montgomery, Alabama, but their arrival changed the city and our nation.

Freedom Riders, black and white, male and female, none of them older than 22, stepped off a bus at the Montgomery Greyhound Station on May 20, 1961. They were prepared to meet mob violence with non-violence and courage. They prepared farewell letters and wills. Their goal was to help end racial segregation in public transportation. And they did.

Today, also includes a tour the Alabama Jazz Hall of Fame. The museum offers you a chance to immerse yourself in the state’s rich jazz heritage. The museum contains more than 2,200-square-feet of exhibits. After your tour, see a showing of “Jazz in the Magic City,” a very interesting jazz documentary outlining the progression of Jazz in Birmingham, AL.  Return to hotel.  Dinner on own. (B)