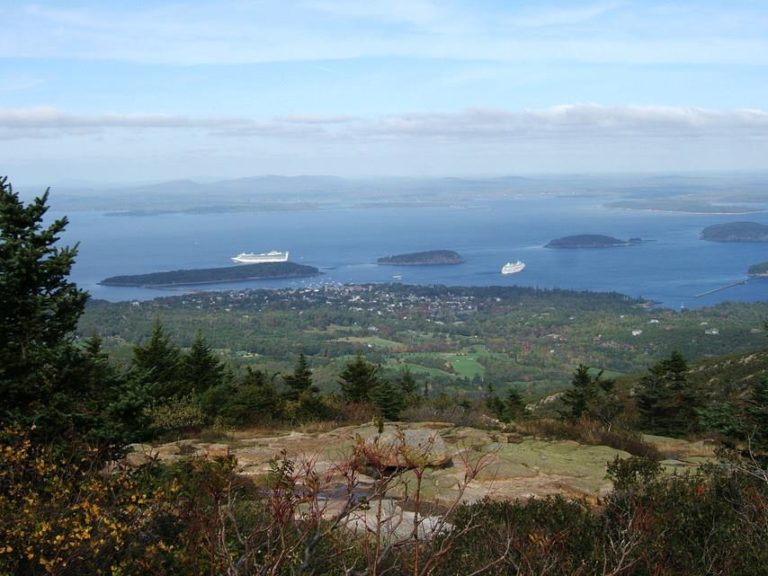 Acadia is the oldest National Park east of the Mississippi River and was discovered by Samuel de Champlain in 1604. Learn of John D. Rockefeller’s instrumental role in the Park’s development, listen to tales of the Wabanaki people, the island’s original habitats, and discover why this Park has become one of the most sought-after destinations in the United States.

Day 1 – Bar Harbor, Maine – Arrive in Bar Harbor, ME this afternoon. Check into the Bluenose Inn for a four night stay on the “Most Beautiful Island in America.” With sweeping views of Frenchman Bay, enjoy a memorable stay on Maine’s famed Mount Desert Island, at the Bluenose Inn, and home of Acadia National Park.

Tonight, a Welcome Dinner is served at the Inn. Following dinner, live entertainment is available in the Great Rooms. (D)

Begin your visit with a Carriage Tour where you will experience the Park’s world-famous carriage roads as designed and built by John D. Rockefeller, Jr. A fully narrated, two-hour ride takes you on a leisurely step back in history tour featuring some of the most remarkable bridge work in America. You may dismount the carriage and explore the Cobblestone Bridge, the first of Mr. Rockefeller bridges built in 1913. Your tour ends with a visit to the historic Jordan Pond Gatehouse, financed by John D. Rockefeller Jr. and designed by Grosvenor Atterbury, a prominent New York architect, in the French Romanesque style. It was completed in 1932 with the intention of marking the entrance to the carriage roads and preventing automobiles from entering.  A picnic lunch will be included with your visit to the park.

Before dinner, meet Captain John Nicolai, one of Maine’s most knowledgeable and entertaining lobster experts. Enjoy hearing of his tales from the Maine coast – a very fun and informative presentation. The Captain has been featured on the CBS Morning Show, the Food Network and the Travel Channel to name just a few.

Tonight enjoy a delicious dinner at the hotel. You have the choice of a 1-1/4 lb traditional Maine boiled lobster with red potatoes, corn on the cob, and steamers OR a grilled New York Strip Steak topped with bleu cheese butter. Try the apple crisp with vanilla ice cream for dessert. (B,L,D)

Day 3 – West Quoddy Lighthouse – Roosevelt Campobello – Tea with Eleanor – Located on the most eastern point of the continental United States, West Quoddy Head Lighthouse is a stunning spot to see the first rays of sun in the country. Located in Quoddy Head State Park, the original tower was built in 1808 under orders from President Thomas Jefferson.

The lighthouse tower that stands today was built in 1858. Stop by the Visitors center located on the first floor of the lightkeeper’s historic residence. In addition to historic and interactive displays, you can view and purchase unique artwork by skilled local visual artists.

Next, you visit Roosevelt Campobello International Park, a singular example of international cooperation – jointly administered, staffed, and funded by the peoples of Canada and the United States. Franklin and Eleanor Roosevelt’s magnificent summer home is preserved here in a combination indoor museum and outdoor nature park on Campobello Island, New Brunswick, Canada.  Don’t forget your passport.

Start with a visit to the Edmund S. Muskie Visitor Centre, where panels, displays, and a short video interpret the Roosevelt story from the time Franklin Roosevelt and his parents first visited Campobello through his battle with polio, his presidency, and the establishment of the Park.

Then tour FDR’s “cottage” which has been preserved, and is almost exactly as it was in 1920, the summer before Franklin was stricken with polio. As an adult he said shared with his family the same active pursuits he enjoyed on the island as a child. Join an expert guide for a tour of both floors of the 34-room memorabilia-filled cottage.

End your visit with Tea with Eleanor.  Enjoy hot tea, delicious cookies and an expert guide telling the story of Eleanor Roosevelt’s extraordinary life. You will also receive a copy of a book of cookie recipes compiled by Eleanor’s granddaughter.

Day 4 – Abbe Museum – Schooner Margaret Todd Cruise – After breakfast this morning, you visit the Abbe Museum.  In recent years, the Abbe has grown from a small trailside museum, privately operated within Acadia National Park, to an exciting contemporary museum in the heart of downtown Bar Harbor. In 2013, the Museum became the first and only Smithsonian Affiliate in the state of Maine.

At the Abbe’s downtown museum, you will find dynamic and stimulating exhibitions and activities interspersed with spaces for quiet reflection. The history and cultures of the Native people in Maine, the Wabanaki, are showcased through changing exhibitions. You will also take part in an interesting hands-on workshop at the Museum.

Then you will take a cruise aboard the Schooner Margaret Todd.  The Schooner Margaret Todd is 151′ and sails Frenchman Bay. Launched new on April 11, 1998, she is the first 4-Masted Schooner to work New England waters in over half a century. This cruise features an interesting narrative of local history provided by a Park Ranger, geographical points and wildlife, as you look for bald eagles, seals, and porpoises while amongst the islands of Frenchman’s Bay.

A delicious dinner is included this evening at a local restaurant. After dinner, return to the Inn and gather ’round the fire for a marshmallow roast, complete with chocolate and graham crackers to make your own s’mores. (B,D)

Day 5 – Depart for Home – After breakfast at the hotel this morning, depart for home. (B)